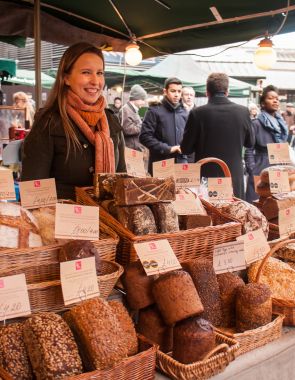 A visit to London’s Borough Market is a sensory – and social – experience. You’ll rub elbows with chefs, restaurateurs, foodies and passionate amateur cooks- all out on the hunt for the best international and local food ingredients. This special food market has been a hub for food lovers for 1000 years, making it one of the world’s oldest food markets and a haven for not only professionals but also anyone looking for exceptional British and international produce.

Many of the people standing behind the market stall are themselves food producers – people who either grow, rear or bake the food that they sell at Borough Food Market. You’ll also find knowledgeable importers happy to discuss the products they source from different corners of the globe.

The Market also offers a huge selection of cafés, restaurants, bars and diners which makes it an ideal destination stop during travels to London, UK.

London’s Borough Market’s annual Apple Day in October 2014 had an exciting make-over as the 1,000 year old market transformed its traditional apple display into a shiny, white modern setting – creating the first ‘real’ apple store. To celebrate the launch of the seasonal apple harvest and to emphasize the market’s millennium birthday, Borough Market brought together the largest ever collection of the United Kingdom’s favourite fruit – the apple – in an exhibition of the 1000 oldest, rarest and most loved British apple varieties.

The world’s oldest known apple, Court Pendu Plat, which was introduced by the Romans and still flourishes today, was displayed in a prestigious Perspex box whilst 999 other varieties were presented on sleek white plinths and shelving units. Unusual varieties on display included the Ananas Reinette with its distinct pineapple flavour, the unattractive Knobby Russet which, covered in knobbles, the Robston Pippin, a favourite of Charles Dickens, and the Victorian Adams Pearmain.

Whether you live in London or are planning a holiday in London, you’ll want to add a stop at this very special food market. Borough Market is easily accessed by public transport. The enormous food market is only a few seconds walk from a major train station, is on countless bus routes and there’s lots of bike racks for cyclists.