On our last night in Rome we ate at a funky small restaurant with new friends: an Irish Galileo scholar working in Rome and his sculptor girlfriend, a native of Cannes.

To get to the place they’d recommended, we walked for blocks and blocks from the Hassler Hotel, our hotel atop the Spanish Steps through Rome’s lively pedestrian precincts where only taxis and delivery vehicles are allowed. We window-shopped our way through the chic boutique quarter that radiates out from Piazza di Spagne, strolling on into quieter residential districts beyond. Everywhere we looked in the narrow, meandering, lamp-lit streets and alleyways there were arresting medieval and renaissance vistas. 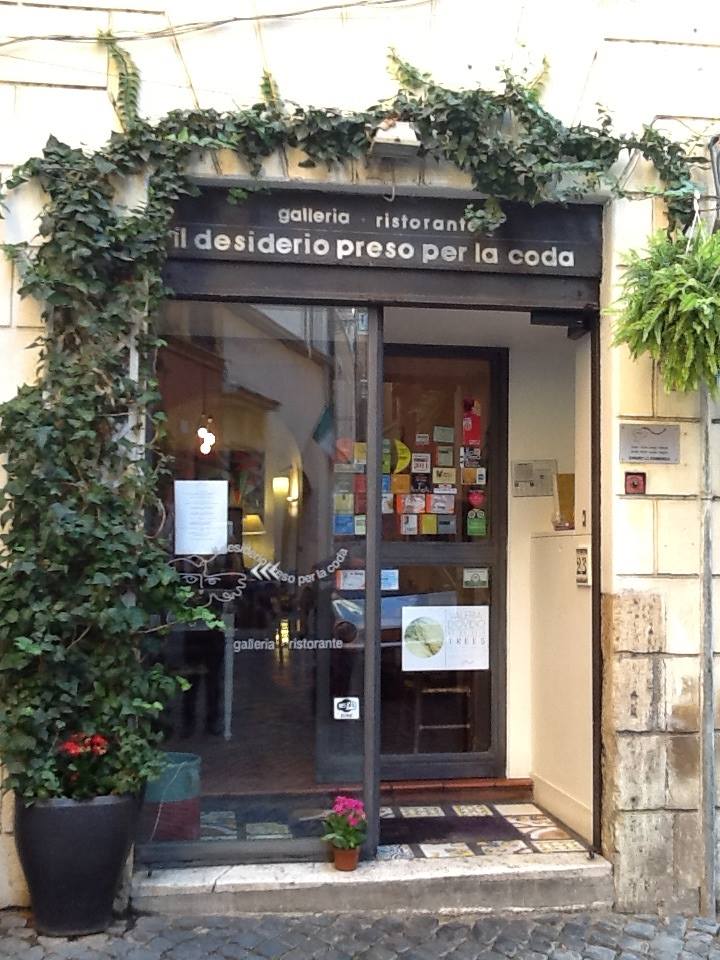 The restaurant was called Il Desiderio Preso per la Coda, which means something like “desire captured by the tail”. It turned out to be only a block or two from the second-century Pantheon and the church of Santa Maria sopra Minerva where Galileo was tried by the Inquisition in 1633.

The daily specials offered fish, meat and vegetarian dishes. The Italian food was good and, for Rome, inexpensive. The eclectic restaurant gallery was clearly a labour of love. Anna and Maurizio Corrado’s dream of opening a gallery/restaurant had materialized in 1986, with the restaurant’s name taken from a play written by Picasso. Anna’s daughters are often seen helping in the kitchen.

Over a second bottle of Vino di Scansano I asked our cosmopolitan companions how they thought Rome compared to Paris. They did not hesitate: “No contest.” It was not simply the depth and richness of the historical surroundings, they said, but the vibrancy of life in the city.

Some might call it anarchy. An enduring picture of Rome, for me, is a pretty young woman in a skimpy black sheath and sling-back heels chatting animatedly on her cell phone while smoothing her hair and checking her makeup in the rear view mirror of her Yamaha scooter. She then rockets off with the green light into the bedlam of traffic on the Via del Corso. No helmet, of course; no driver’s license, either. You don’t need one to drive a scooter in Rome.

The morning after our dinner, speeding down the Corso de Francia on our way to the airport we saw a scene that must be repeated dozens, scores, of times a day all over the city. A Fiat Uno cheekily poked its front quarters out of a cross-street in the accepted technique for inserting one’s vehicle into the traffic flow, and was promptly smacked by a scooter speeding down the meter or so of open real estate between the curb lane vehicles and the curb itself.

Whap! The scooter rider did a loop-the-loop through a shower of plastic and chrome, landing neatly, almost gracefully, on his rump, while his mangled Vespa bounced up onto the sidewalk. His briefcase landed beside him and sprang open. He looked at it and then at the car, while the driver rolled his eyes skyward and lifted his right hand, palm upward, in a silent questioning of Divine wisdom: “I needed this ?”